THE WEEK ON WALL STREET

Stocks rallied last week thanks to fresh confirmation of inflation’s cooling trend and growing optimism that an inflation slowdown may provide the Fed with space to ease up on future rate hikes.

Investor sentiment came into the new year weighed down by recession fears and concerns that Fed rate hikes may “go higher for longer.” Last week a different narrative emerged. Sustained declines in inflation, a rate hike cycle nearing an end, and a resilient economy that may avoid recession resulted in a broad-based rally.

Moderating inflation was evident in the Consumer Price Index (CPI) report released on Thursday, which, in combination with a strong labor report the previous Friday, gave investors confidence that the environment for stocks had improved. Stocks extended their gains to end the week as a few money center banks kicked off a new earnings season with upbeat reports.

December’s CPI report showed a 0.1% decline in prices from November and a 6.5% increase from a year ago. It was the sixth-consecutive month of decelerating year-over-year increases. Core prices (excludes food and energy) slowed to 5.7%, a decline from the previous month’s 6.0% year-over-year rise. For the last three months, core prices have risen at an annualized rate of 3.1%–the slowest pace in over a year.4

Falling gasoline prices (-9.4%) accounted for most of the monthly decline in the CPI. Used car prices (-2.5%) were another bright spot.5

THE WEEK AHEAD: KEY ECONOMIC DATA

Source: Econoday, January 13, 2023
The Econoday economic calendar lists upcoming U.S. economic data releases (including key economic indicators), Federal Reserve policy meetings, and speaking engagements of Federal Reserve officials. The content is developed from sources believed to be providing accurate information. The forecasts or forward-looking statements are based on assumptions and may not materialize. The forecasts also are subject to revision.

THE WEEK AHEAD: COMPANIES REPORTING EARNINGS

Source: Zacks, January 13, 2023
Companies mentioned are for informational purposes only. It should not be considered a solicitation for the purchase or sale of the securities. Investing involves risks, and investment decisions should be based on your own goals, time horizon, and tolerance for risk. The return and principal value of investments will fluctuate as market conditions change. When sold, investments may be worth more or less than their original cost. Companies may reschedule when they report earnings without notice.

"I didn’t know that I was different and now I realize how very different I was.
But difference is what makes the world beautiful." 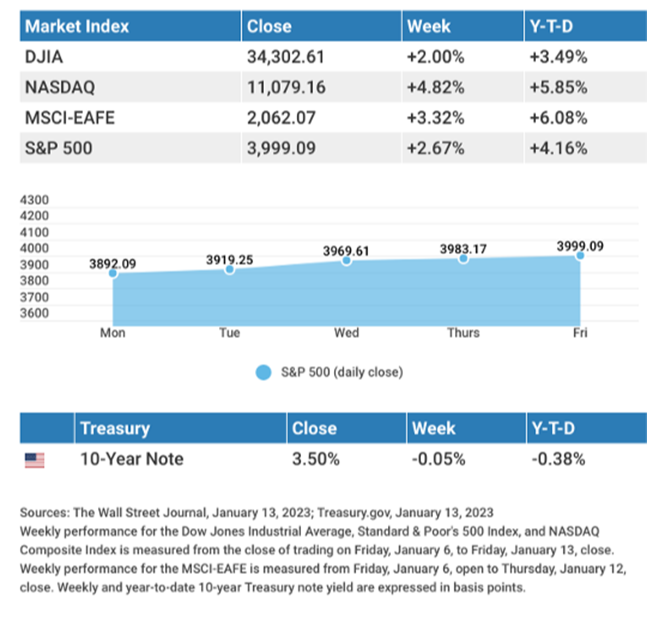 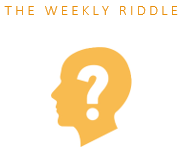 Last week’s riddle: It is a short and simple word, and something that everyone needs.
Put an 'r' on the end and you have a new friend, but if the first letter goes away, you are sad.
What is this word?